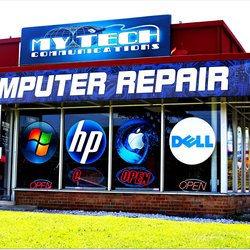 This article is part of a series on local business success stories.

HAGERSTOWN, MD - Very few people in Hagerstown and Washington County haven't heard of Chris Abbott. Between his controversial social media posts and his unorthodox marketing strategies, most of the surrounding area knows about the My Tech computer repair shop located at 701 Dual Highway.

Chris established My Tech in 2009.  His business has grown by leaps and bounds, as he continues to provide quality service at affordable prices. He provides personalized service for every customer, and works with them to provide the best repair option at the lowest cost.

I have personally encountered the quality of Chris' service, not only through servicing my own computer systems, but through random encounters with other customers.

The story which sticks in my mind the most is the time I was in a local store looking at computer accessories, when another customer asked me if I knew anything about computers. When I told her I did and asked what sort of issue she was having, she proceeded to tell me that she was sent there by Chris at My Tech to buy an external USB keyboard, so she could avoid the cost of repairing her laptop's broken keyboard. I was absolutely amazed, here is a man who will tell customers how to avoid paying him for repairs! You can't find service like that anymore.

You enter My Tech as a customer, and leave as a friend.

or the new location opening October 3:

Ken Buckler is the editor of the WashCo Chronicle. Do you have a local business success story you'd like to share with Washington County? Email washcochronicle@gmail.com

Email ThisBlogThis!Share to TwitterShare to FacebookShare to Pinterest
Labels: Success

Brian Carruthers to Speak in Hagerstown

A Maryland/DC native, his business knowledge came from many successful associations with very wealthy and successful entrepreneurs - one of whom was his father, who built one of the largest real estate companies on the East Coast in the 1970s.

By the age of 30, Mr. Carruthers pulled all of his experience, knowledge and mentorship and became the mentor for more than 100,000 people across North America. Brian Carruthers has become a “success coach,” helping people to dream again ... then helping them to achieve their dreams.

Ken Buckler is the editor of the WashCo Chronicle.

WASHINGTON, DC - The U.S. Census Bureau is the premiere source of data about America’s economy and businesses, and we’re committed to making our data more accessible than ever before. I’m pleased to introduce our latest tool in that effort: Census Business Builder: Small Business Edition.

Every day, businesses large and small use Census Bureau data to make important decisions. Large companies have sophisticated research staff to do this work for them, but small business owners are often left to their own devices. We’ve talked to many entrepreneurs across the country, and a common request is for more Census Bureau data in an easier-to-use format. We listened, and in response, we developed Census Business Builder: Small Business Edition to provide them with easier access to more data.

“The American government, American businesses, and Americans themselves are attacked over the Internet on a daily basis,” Chairman Steve Chabot (R-OH) said in his opening statement. “Sometimes they know, sometimes they don’t. These attacks come from criminal syndicates, “hacktivists,” and foreign nations. They’re after intellectual property, bank accounts, Social Security numbers, and anything else that can be used for financial gain or a competitive edge. But the majority of cyber-attacks happen at small businesses.  In fact, 71 percent of cyber-attacks occur at businesses with fewer than 100 employees.”

Among those who testified at the hearing was Steve Grobman, Chief Technology Officer for Intel Security Group, saying, “Over the past decade, the attacker type has evolved from recreational “hackers” with limited capabilities to organized crime and state sponsored actors employing extensive resources and highly skilled personnel.”

The Committee also heard from Todd McCracken, President of the National Small Business Association, who discussed the fact that small companies currently have fewer resources to address cyber attacks. “Many small companies are not in a position to have a dedicated IT department, and many either outsource IT functions or assign such duties to an employee with other responsibilities—often the owner him/herself. In fact, the number of business owners who personally handle IT support appears to be on the rise,” McCracken said.

Dan Berger, President and CEO of the National Association of Federal Credit Unions, who also testified said, “Data security breaches are more than just an inconvenience to consumers as they wait for their plastic cards to be reissued,” Berger said. “Breaches often result in compromised card information leading to fraud losses, unnecessarily damaged credit ratings, and even identity theft.”

“This isn’t the Internet of 1995, when most Americans simply got online to check e-mail,” Chabot said. “This technology – and our behavior with it – is the underpinning of our modern economy and the foundation for our future. This is why we must address cybersecurity now, so that as a country and as a leader in the global marketplace, we can operate without fear of attack.”

Chairman Chabot shared concern for the negative impacts of mounting cybersecurity pressures against the small business landscape and expressed the need to proactively combat these issues moving forward.

Investing in Yourself and Time Management

Something I have always striven for is to expand my knowledge, and develop new skills.

My mentor Mr. Small strongly urges all of his team members to read ten pages of a professional development book per day. I have a very hard time with this, because when I start reading a book I enjoy, I really don't want to put it down.

I'm currently reading Sun Tzu for Business Success, and it's an absolutely amazing book. I'll get lost in the pages sometimes, and exceed my goal of ten pages.

I picked the book up at Ollie's for dirt cheap. If you've never been in Ollie's, I highly recommend it - their business and other books are absolutely amazingly priced, and always changing. I can normally buy ten books at Ollie's for the price I normally pay for one.

But it's very important to always invest time in yourself, as well as your family. I really need to break myself of reading more than my ten pages per day, because I'll end up missing out on other important things, like family time.

Something I always stress to other people - it's great to be focused on work, but also focus on yourself, and focus on your family. If you spend all day and all night working, then you're not living life, you're just going through the motions.

Ken Buckler is the editor of the WashCo Chronicle

10 Ways to Use Life Insurance

The following is a guest article by Richard Bibbee.

Life insurance is there for your family
when the unexpected happens. But it can also do more.
Here are some common ways – and a few ways that are more
unexpected – to get the most from your life insurance protection.
Ask yourself the following questions to see what uses may
be right for you.

Email ThisBlogThis!Share to TwitterShare to FacebookShare to Pinterest
Labels: Insurance

HAGERSTOWN, MD - The Washington County Department of Planning and Zoning  would like to remind citizens of upcoming Comprehensive Plan public meetings.

All meetings to solicit public feedback regarding growth, development and agricultural land preservation will be held on the following dates:

Featured Resource: "Inc. Magazine's How I Did It eBook"

How I Did It is one of Inc.'s most beloved features, sharing the personal journeys of entrepreneurs, often from humble beginnings and almost always to national prominence. It offers dramatic proof that though every entrepreneur has a distinctive style and way of seeing the world, success comes to those whose focus is on quality and execution. The Inc. Wire eNewsletter gives you the news - from all over the web - entrepreneurs need to know now.

Email ThisBlogThis!Share to TwitterShare to FacebookShare to Pinterest
Labels: Resources

Coming Soon! An all new way to help grow your business in Washington County, MD!

WashCo Chronicle is expanding to include a business section!

This section will contain business tips, resources, and information about local businesses in Washington County, MD and surrounding areas.

Are you a business owner or manager, and interested in promoting your business for free?

Submit your business stories to WashCoChronicle@gmail.com, and we'll publish them!

Make sure to include a tagline about your business, and contact information.

From the editor and volunteer contributors of the WashCo Chronicle, we thank you for helping us grow!

Ken Buckler is the editor of the WashCo Chronicle.